At the cobbled Castle Square, I found summer in the city of Warsaw, Poland.

Slurping on my freshly squeezed lemonade, I stretched out at the steps of King Zygmunt III Waza’s statue. Even though it was already in the early evening, the city life was buzzing. As the locals were rushing home, tourists tried to savor the last drops of sunshine.  They filled up the traditional-cuisine restaurants, sat on the remains of the medieval Barbican and Defense Walls that guard the Old Town or on the steps like me. 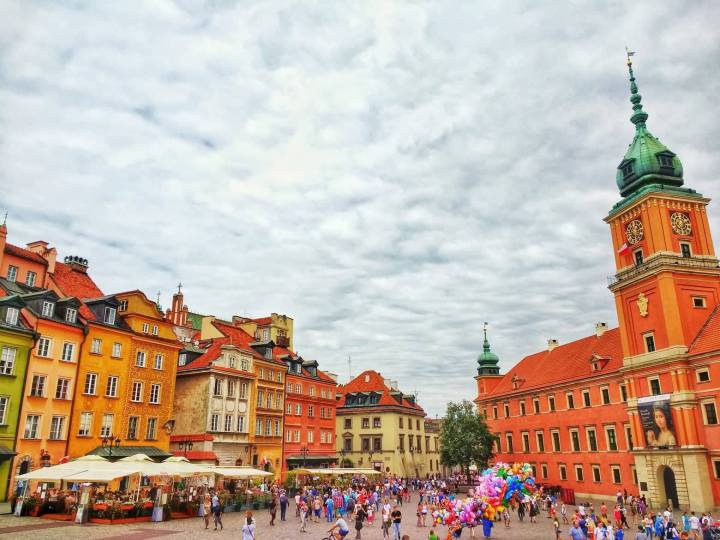 With loud laughter, two children ran towards a flock of cooing pigeons, causing them to spiral above the square. In the middle of the square sat an older woman selling her collection of 99 shades of neon helium balloon, competing with the height of the King’s statue, and bending to the will of every soft summer breeze. When this happened, tourists crawled under the wind-influenced balloons to overcome the ever-changing obstacle or enjoyed the new-found photo opportunity. (#instatravel)

A woman with a box of pizza and a group of three kids joined me on the steps to later enjoy the sunset. A layer of golden sun fell on the old town houses making their normally humble shades of brown, light green and pastel blue radiant.

A group of carriages was lined up in front of the red walls of the Royal Castle. As the horses began to trot across the square, it was, as if by fate, the wind caught the balloons to create an arch. To passengers, the ride must have compared to something out of a fairy tale as they went through.  The sound of cackling hoofs was nearly lost in the noise, unless you listened for it.

Musicians performed the soundtrack to this beautiful evening: “Nothing Else Matters” from Metallica on a xylophone or a guitar version of “Despacito” were my favorite.

I lost count of the minutes I sat there taking it all in. This moment didn’t need any words, no “wow”-factor to make it special. It simply was.

To me, no other place in Warsaw gives off as much of a scent of history as the Castle Square. Yet, I didn’t expect that a place celebrating life, used to be a place for public events such as speeches or numerous executions. Since much of Warsaw was destroyed during World War 2, including the 14th-century castle, most sights had to be re-built (often based on remaining paintings). Today, the Castle Square as well as the rest of the Old Town are a marked as UNESCO World Heritage Sites.

Small alleys lead through the Old Town. The smell of waffle hangs in the air like a thick cloud along with ice cream swirled into waffle cones as high as a hand is long, they seem to be popular tourist treats.

Along the way, people crowded street performers, such as marionette players. I particularly enjoyed a band of four teenage boys playing the violin, accordion, banjo and drums celebrating Polish music. I have to admit, I didn’t understand a single word, but the energetic rhythm and the pedestrians singing along was enough of a reason to stop and stare.

I loved the small stands that carefully laid out their bouquets on the pavements. You could watch the women putting them together: Combining halms of corn with red poppy seed and common tansy. However, my favorite thing to do in the Old Town was to browse antique stores selling old jewelry and postcards dated back all the way to the beginning of the 20th century (If only I could translate the writing…) and endless amounts of souvenir shops displaying Polish folk art, which features floral ornaments or colorful roosters.

Leaving the Old Town, the spirit of the Polish capital becomes clearer. Warsaw is a town of re-invention. Pearls of history are filling the picture of the city scene that is reaching high for the modern spirit with glass skyscrapers.

One of the pearls is the Fotoplastikon, a stereoscopic theatre. Taking one of the twenty-four seats, I pressed my eyes at the goggle-like peepholes taking a glimpse at life in Warsaw around the 1940s through the camera lens of a German soldier. With each picture comes a small description.

As you know, I am all about insider spots like this one. Another insider -I could not possibly stress enough how much I fell in love with this place- are the rooftop gardens of the university library. Not only is it a place with photo-opportunities that will make your Instagram go wild, but it offers a scenic view across the city (You can see all the way to the Old Town) and the Vistula River that shapes Warsaw’s face. 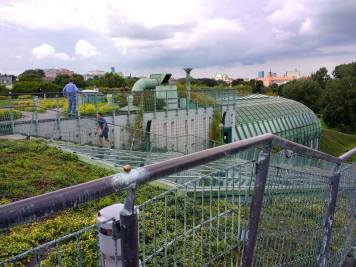 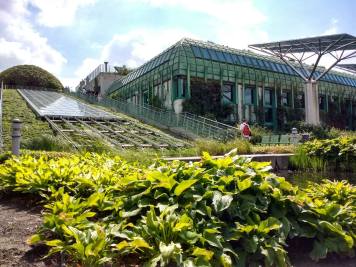 The day I was up on the rooftop gardens was the Day of Assumption, a Polish holiday to honor Polish soldiers. It wasn’t until the people beside me waved and pointed up to the sky that I noticed the jets painting the colors red and white in the sky. 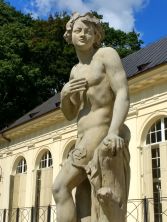 Another spot to love is the Łazienki Park, which compares to a real-life fairy tale forest. I saw that some locals, who take their afternoon stroll through the park, have a handful of walnuts in their bags. It came immediately apparent why: to feed the squirrels. –I highly recommend you do the same.  These cuties are not scared of people and gladly accept a delicious snack. (If feeding squirrels is not your thing, there are also fish that will vacuum up every crumb you feed them.) 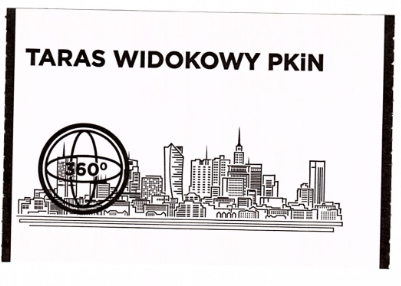 On top of the Palace of Culture and Science, the Empire State Building of the city. if you will, the Old Town and river disappear in a grey sea of uniform slab buildings. Yet, the city is dotted with the colors of street art, neon signs and advertising billboards.

To understand Warsaw’s beauty, stop and make up your mind whether the building you are looking at is truly ugly or simply dirty. 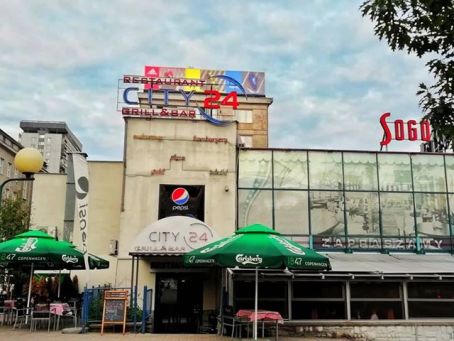 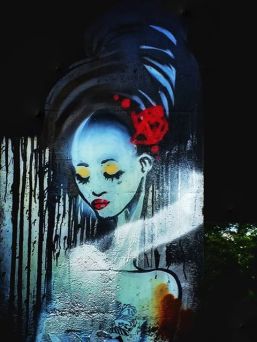 Pigeons line up at the water gutters trying to spot potential food sources. –Surprisingly, they are not hard to find. One of them being an older lady, who leaned on her metallic walker, eventually grabbed into her bag and threw a handful of corn into the air. But as the birds took flight, she immediately disappeared behind their flapping wings.

To be honest, there were two things that brutally shocked me: First thing being the trouble I had communicating in English. And secondly, the large amount of homeless people (especially around the main station). I have NEVER seen this many! I am aware Poland has already taken action to help the situation, but I feel

more steps have to be taken to get people off the streets!

What took me by surprise in Warsaw? The classy clothing style! No question. In my mind, the fashion scene compares to the one in New York. Beautiful dresses, skirts, shoes… What I would feel is appropriate to wear to a fancy event is definitely what can be worn on a daily basis. I absolutely love it! Next time, there will be no holding back!

All in all, Warsaw is a highly underrated tourist destination! I will definitely go back to the city that tells a new story every day.

The only question left to answer is when are you telling yours?

On a personal note, I wanted to say “Thank you” for you appreciation and reaction to my last article. Guys, you made me feel all fuzzy inside. I love every single one of you. Thank you so much for being a part of this journey and leaving a few footsteps behind.

A special shout-out to the new followers Vibe a Little, Jodi Ambrose’s Blog and With Every Good Wish! . Thank you for following. I hope I will continue to inspire you and make you smile once in a while. 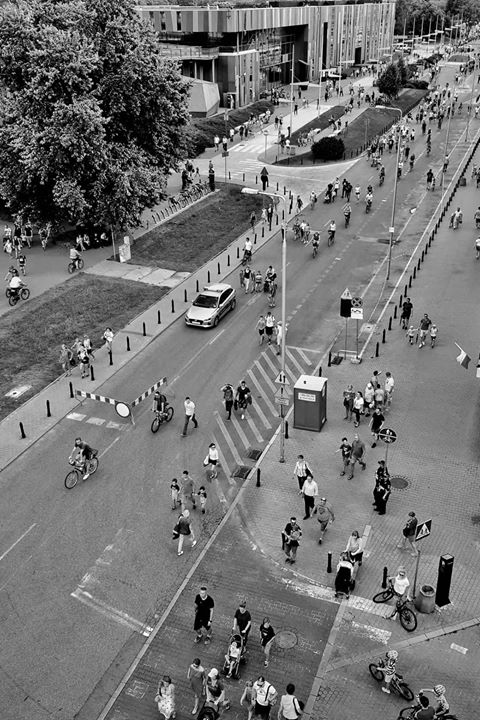 I hope with this little spot, I can create an inspired playground to give my spaghetti-like thoughts the room they deserve.

Searching is where the miracle procress begins